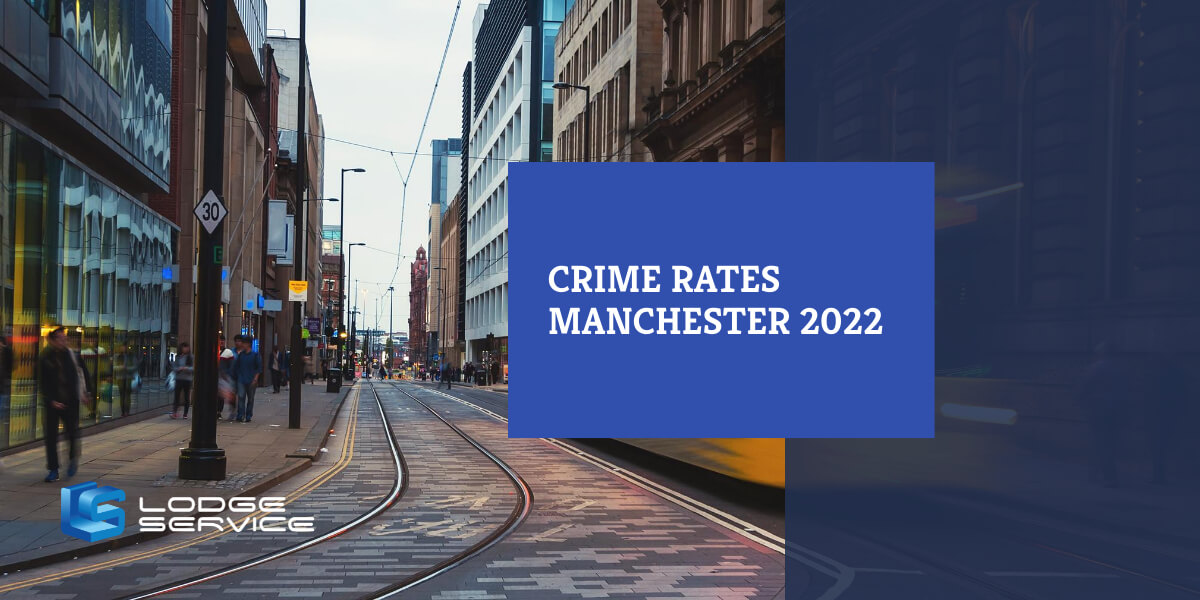 Manchester has a significant history of crime. During the 1990s and 2000s, crime rates were among the worst in the UK and remain high to this day.

Manchester, not Birmingham, is Britain’s second-largest metropolitan area, after London. The conurbation had a total population of 2.822 million in 2019 compared to Greater London’s population of 8.908 million. The city grew by more than 20 percent since 2010.

In this article, we explore crime statistics in Manchester and what they mean for any businesses operating in the area. You’ll discover the types of crime most prevalent in the city, how Manchester compares to the rest of the UK, whether or not crime is increasing, and where you should locate if you are thinking of moving to or locating in the region.

Types Of Crime In Manchester

Crime in Manchester is, unfortunately, widespread. Worse still, there is a strong bias towards more dangerous offences. The most common type of crime in the city is violent crime with more than 108,345 offences recorded in 2019. In the UK, this category includes everything from common assault to murder using weapons such as acid, knives and firearms.

According to Greater Manchester Police, anti-social behaviour is the next most common crime. The city recorded 61,986 incidents of the offence, according to the latest data.

Other common types of crime in descending order are:

Some types of crime have become significantly more common in recent years. For instance, there were 9,286 violent crimes recorded in June 2019, up from just 2,833 in December 2010. However, other types of crime declined. Theft from the person, for instance, fell from between 900 and 1,000 incidences per month to a little less than half that.

How Does Manchester Compare To Other UK Cities?

Manchester is one of the UK’s worst-performing cities in terms of crime. Compared to other major urban centres, the crime rate is exceptionally high. Manchester currently sits in second place of all council areas throughout the country.

The City of London has a higher crime rate at 497 per 1,000 population. However, this is because it has a significantly lower residential population. As such, it is not comparable to Manchester. For all practical purposes, Greater Manchester is the most dangerous place to locate in the country.

The type of crimes committed in Manchester may also be worse than in other major cities, too. Manchester ranks around sixth in the UK for antisocial behaviour, such as vehicle nuisance, or inconsiderate behaviour. However, it has a much higher share of total violent crimes, vehicle crimes and property crimes – the types of crimes that most businesses care about.

Is Crime In Manchester Increasing?

Unfortunately, the evidence suggests that the number of crimes being committed in Manchester is increasing. However, Manchester police recently stopped providing up-to-date crime statistics to the public. Because of this, it is not entirely clear how much crime has risen recently, if at all.

What Are The Safest Areas To Locate In Manchester?

If you are concerned about crime rates in Manchester, you may want to locate in safer areas. Among the safest are Rusholme, Chorlton, Fallowfield, Didsbury and Gorton. Other somewhat safe areas include Withington, Levenshulme and Stretford.

The most dangerous areas of the city are Moss Side, Longsight and Hulme. These report above-average crime rates across most categories, particularly antisocial behaviour.

How Does Manchester Compare To Other Global Cities?

While Manchester does not compare favourably to UK cities, it performs significantly better on a global basis. That’s because, in general, Britain is a safe country, particularly compared to the US and the developing world.

Manchester has a safety index of 43.85, according to Numbeo. That puts it between San Francisco and Las Vegas on a global basis. Manchester is significantly safer than Delhi, India, and Lima, Peru. However, it is not as safe as Zurich, Switzerland, or Canberra, Australia.

While crime is a significant problem in Manchester, the police and security services are attempting to push back against it. Officers are handing out more fines and penalty notices, noise abatement notices, injunctions and crowd dispersal techniques. They’re also implementing so-called “parenting orders” on parents who aren’t raising their children properly, which may bode well for the future.

If you plan on locating a business in Manchester, it might be wise to improve your Manchester security now, particularly in light of the high crime rates in the area. Priorities should include implementing CCTV, working with a security company, hiring security guards, and installing various alarms. Furthermore, you may wish to locate in an area that has lower crime than the average for the city.