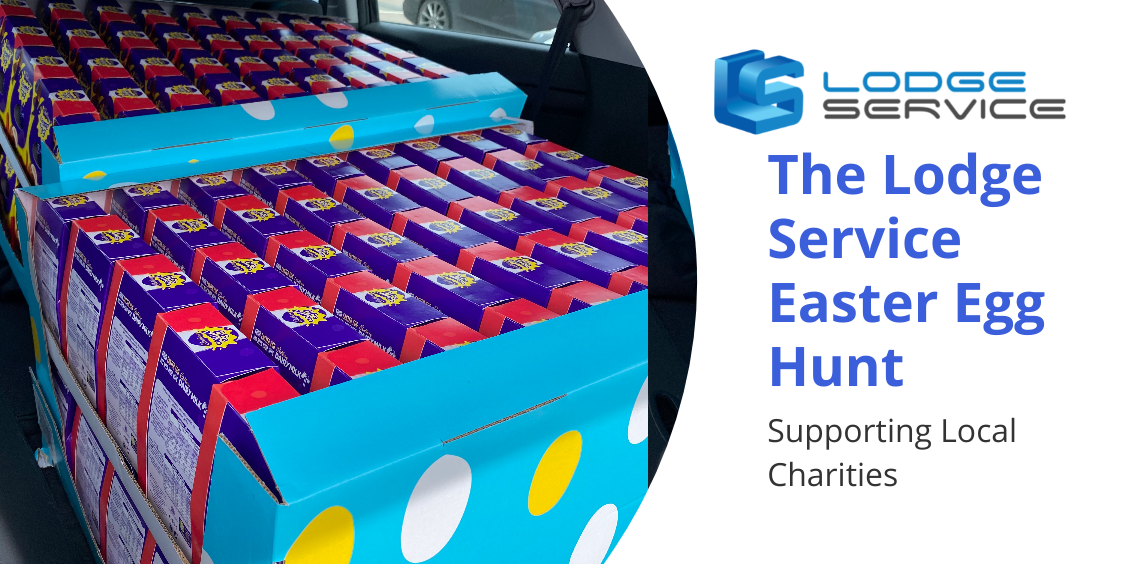 With Lodge Service being a third generation family business that has operated for over 100 years, we have always had deep routed connections with the local communities in which we are a part. After opening our new Corporate office space in Dagenham earlier this year, we wanted to begin our campaign of community engagement and interaction.

Coming up to Easter, it was a great opportunity to start as we mean to go on by donating Easter Eggs to the local children’s ward via the King George & Queens Hospital Charity.

In addition to this incredible charity we also engaged with Richard House Children’s Hospice, which is based in East London and provides palliative care to children with life-limiting and life-threatening conditions across London.

Opened in 2000, Richard House was London’s first children’s hospice. It was founded by their Life-President Anthea Hare, who was inspired by both her experience as a paediatric nurse at Royal London Hospital in Whitechapel, and through helping her parents to look after her severely autistic brother.

Having chosen two inspirational charities to support, we placed our order online for 150 Easter Eggs, to be delivered before 12pm on Tuesday 12th April. We had committed to both Trish from Richards House Children’s Hospice and Kyra from King George & Queens Hospital Charity that we would then make the egg deliveries in the afternoon, so they we able to distribute them to the children the following day.

When 12pm arrived on Tuesday and there was no sign of the delivery, I called the supplier to enquire as to its whereabout, only to be told that due to lack of stock the warehouse had cancelled our order, without notice or communication. Owing now to the time of day and being so close to Easter, there was no other stock available for us!

Disappointing the children was never an option, and after numerous unsuccessful phone calls to local suppliers who were unable to assist, I turned to Corporate Operations Manager Darren Innes and said “Lets get in the car”. We then drove to a local Asda superstore and asked to speak to the store manager. After informing him of our plight and our extensive requirement, he said “I’ll be right back, I will see what I can do”. A short time later he returned with a pallet of 180 Easter Eggs of which we swiftly purchased all 180.

After loading them into the boot of Darren’s car we began our journey to our first drop off at Richard House.

Arriving at Richard House Children’s Hospice at 1:45pm, just under 2 hours after we were let down by our initial supplier, we made our first donation.

We were greeted by Trish who kindly spent time with us to tell us more about the incredible work they do at the Hospice, providing numerous key services to families that are most in need.

We then made our way over to Romford to visit King George & Queens Hospital Charity and met with Kyra and Malina.

Both Kyra and Malina were planning to take our donation, as well as those from others, to the Children’s wards the following day, and we were extremely pleased to have been able to contribute to what will hopefully bring smiles to the faces of all the children currently in the hospitals care.

Kyra later commented “We are so grateful that local businesses like Lodge Service have generously donated Easter eggs to our charity. The eggs brought a smile to children’s faces as they lit up with excitement in our hospitals. The support and kindness of our local community helps make our hospitals even better.”

A huge thanks is owed to Trish from Richard House Children’s Hospice, both Kyra and Malina from King George & Queens Hospital Charity as well as the store manager from Asda who’s name unfortunately in our hast I was unable to write down!

If you would like to hear more about the work Lodge Service do with our local communities or to talk to us about any of our services, please contact us and one of our team would be more than happy to help.